Let’s Design a Console Based Board Game in C++.

With this Design you can learn MVC, Observer and State Design Pattern. Moreover, with the same design you can also implement any other Game Like Battleship etc.

In this we will build Console Based Version of MasterMind Game.

Complete Code for this is available at,

What is a MasterMind Game

Its basically a board game where each Codemaker sets a pattern and Code-Breaker tries to guess that in Limited chances. Here CodeMaker is Computer and CodeBreaker is Player.

The codemaker chooses a pattern of four code pegs. Also, Duplicates are allowed, so the Computer could even choose four code pegs of the same color. The chosen pattern is placed in the four holes covered by the shield, visible to the codemaker but not to the codebreaker.

The codebreaker tries to guess the pattern, in both order and color, within twelve turns.
For each turn Player will get a Row. Each row will have four holes. For each guess player place a code pegs in that row in decoding board.

Once placed, the codemaker provides 4 Code Pegs as feedback for these 4 placed code pegs repectively.

These Feedback Code Pegs can be,

If in these 12 Turns CodeBreaker is able to Guess color of 4 Pegs then Player (CodeBreaker) Wins else Loses.

Now Let’s Design The Console Based Version of this Board Game in C++ using MVC Architecture and few Design Patterns Like Observer and State.

This MasterMind Game has been designed using MVC architecture. 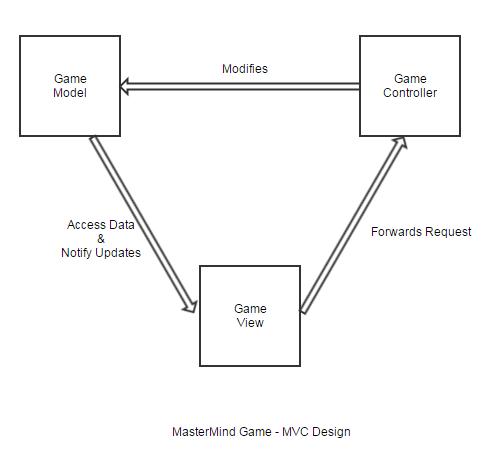 It is important to note that Game View and Game Controller depend on the Game Model. However, model depends on neither view nor controller.

The Game View renders a presentation of modeled data on console.
Responsibilities of Game View, 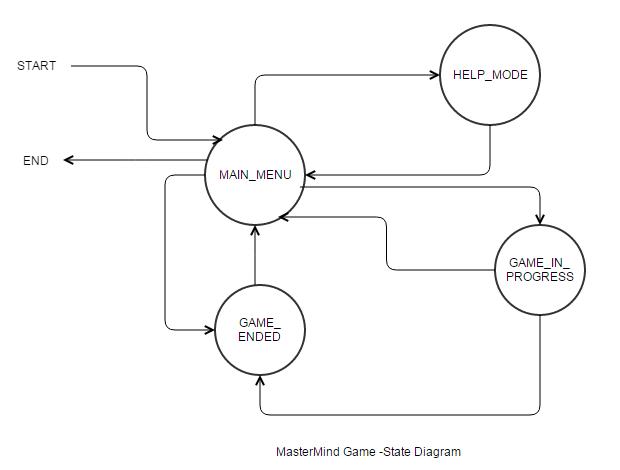 There can be only 4 types of Game States i.e.
MAIN_MENU:
It represents that game is in main menu and user have three choices here i.e.

GAME_IN_PROGRESS
It represents that game is in progress and user have three choices here i.e.

GAME_ENDED
It represents that game has ended and user have three choices here i.e.

HELP_MODE
It represents that game help is on and user have three choices here i.e. 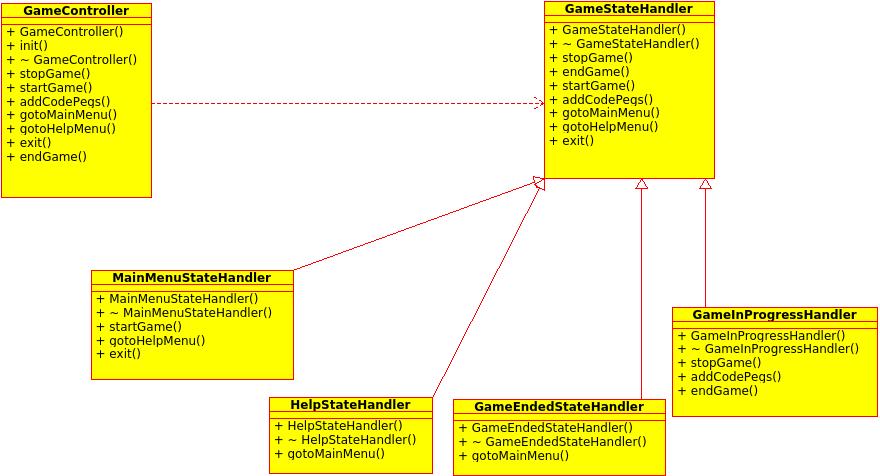 When a request comes to controller then it forwards the request to a State Handlers corresponding to current active state. If that handler can handle the request then it will handle that otherwise it rejects the
request.

It acts as an Observer from Observer Design Pattern. It gets attached with the Subject i.e. Game Model
and gets update notification when Game Model sends a notification.

Game View contains an active Scene and a map of Scene object based on each game state i.e.

Each Scene fetches the data from Game Model and then displays that on console. It also accepts user inputs and forward service requests to Game Controller for action.
It also listens for update notifications from Game Model and on receiving state change notifications it changes the currently active scene. It continuously renders the current active scene.

It acts as Subject from Observer Design Pattern. Different Observers i.e. Game View objects get attached with it. When its internal state changes, then it notifies all the attached views by sending a update notification.

It contains Board objects which internally contains Peg Rows and Peg objects. It completely implements the core functionality of the Game. It also provides operations to update the data and fetch the data from Board.

GIT Repository for complete code is MASTERMIND BOARD GAME CODE

To provide the best experiences, we and our partners use technologies like cookies to store and/or access device information. Consenting to these technologies will allow us and our partners to process personal data such as browsing behavior or unique IDs on this site. Not consenting or withdrawing consent, may adversely affect certain features and functions.

Click below to consent to the above or make granular choices. Your choices will be applied to this site only. You can change your settings at any time, including withdrawing your consent, by using the toggles on the Cookie Policy, or by clicking on the manage consent button at the bottom of the screen.